In an interview, AMD Senior Vice President Sam Naffziger discusses the power efficiency of GPUs. Among the many concerns discussed, AMD gave a chart that predicts the market will have devices with TDPs exceeding 700W by 2025.

The chart doesn’t say much and the chart doesn’t show what AMD plans to deliver in the future. Without context, the image seems to foreshadow what the company would give the market in the near future. And of course we are talking about industrial/data center applications. The graph illustrates the upcoming energy dilemma for the industry, as well as GPU power consumption and TDP rates tracked over time, looking towards 2025. 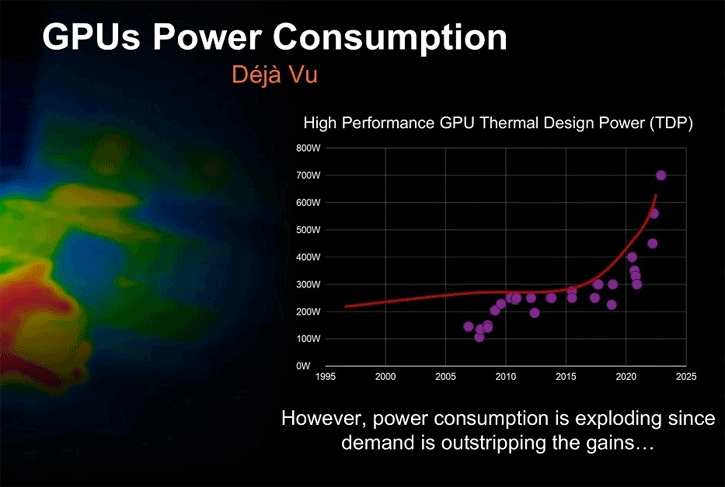 “We took a deep look at Nvidia’s designs and what they did, and of course we wanted to improve on it,” said Sam Na.ffziger.

Sam Naffziger has worked with AMD for 16 years, entering the graphics business in 2017 to improve overall performance per watt and business efficiency. According to the CEO, AMD was aiming for a 25x power saving effort by 2020, which 3rd Gen AMD Ryzen APUs have achieved with Radeon Vega Integrated Graphics. The company now wants to gain 30 times more efficiency in tasks such as machine learning and high-performance computing. According to Naffziger, energy efficiency allows greater architectural freedom. According to him, you can use it to increase performance or emphasize efficiency.

According to Sam, the biggest increase in consumption is due to the increase in the voltage of the graphics cards. The impact on energy consumption is quadratic. And he uses NVIDIA as an example, which can overclock its graphics cards to 2.5 GHz with the need to raise the voltage to 1.2 or 1.3 volts. Meanwhile, AMD verifies that these high frequencies are achieved with lower voltages, and therefore more efficient.